Home Entertainment Music feuds: Cardi B, Nicki Minaj and 8 other pairs who do... 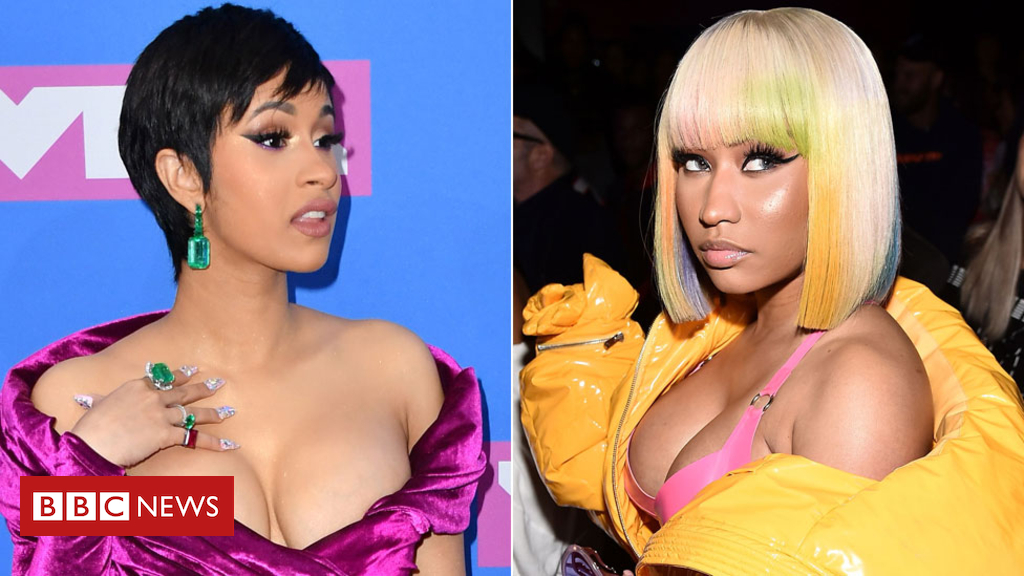 She likes dollars, she likes diamonds, she likes throwing high-heeled shoes at people she doesn’t like very much.

Cardi B’s ongoing feud with Nicki Minaj turned physical over the weekend as the pair clashed at a New York Fashion Week event.

Footage posted on TMZ showed the pair trading verbal insults, with Cardi eventually throwing a red-heeled shoe at Minaj after allegedly being elbowed in the face by a security guard.

Minaj appeared unscathed from the incident.

The exclamation mark key on Cardi’s smartphone took a much worse battering as the rapper continued the beef on Instagram, in a post which also featured a great deal of bad language.

It’s certainly not the first music industry feud in history. It’s not even the first Nicki Minaj feud with another female rapper in history.

Here’s a look at some of the others.

When Lady Gaga dropped Born This Way in 2011, a few people thought it sounded vaguely familiar.

One of those people was Madonna, who thought it was so similar to her 1989 hit Express Yourself that she performed putting the two songs together as a mash-up on tour.

“The only time I ever criticised Lady Gaga was when I felt like she blatantly ripped off one of my songs,” Madonna said in 2015.

“It’s got nothing to do with ‘she’s taking my crown’ or ‘she’s in some space of mine.’ She has her thing. I do think she’s a very talented singer and songwriter. It was just that one issue.”

That one issue, however, was enough to spark a feud which lasted several years.

Gaga – real name Stefani Germanotta – addressed it in her documentary Five Foot Two, released last year, suggesting that she was disappointed that Madonna didn’t speak to her about it directly.

“No matter how much respect I have for her as a performer, I could never wrap my head around the fact that she wouldn’t look me in the eye and tell me that I was reductive or whatever,” she said.

As a band, Oasis were no strangers to scrapes.

An infamous chart battle in 1995 saw Oasis’s Roll With It go up against Blur’s Country House in a race for the number one spot – a contest Blur eventually won.

The competition was so high-profile it even made headline news, much to the bemusement of a somewhat younger-looking John Humphrys.

But there was another Oasis feud still to come – this time an internal one.

In 2009, the year Noel quit the band, he told Q his brother Liam was “rude, arrogant, intimidating, and lazy”, adding: “He’s the angriest man you’ll ever meet. He’s like a man with a fork in a world of soup.”

Last year, Liam said Noel was absent from the premiere of a documentary film about the band because he was probably in one of his “really big houses, eating tofu and having a face peel”.

Their brotherly battle rumbled on last year when Liam criticised Noel for not appearing at One Love Manchester – a concert to benefit the victims of the suicide bombing in the city.

But Noel defended himself by saying he was never asked to play at the show, adding that he’d donated the royalties from Don’t Look Back In Anger to the Red Cross’s Manchester Emergency Fund.

Kanye wasn’t too impressed with Taylor winning video of the year for You Belong With Me. He thought it should’ve been Beyonce’s Single Ladies instead.

And, as we know, Kanye is not the type to bottle up his feelings.

The rapper took to the stage during Taylor’s acceptance speech, grabbed the microphone, and said: “Taylor, I’m really happy for you, and I’mma let you finish, but Beyonce had one of the best videos of all time!”

The pair later made up, but a few years down the line, West claimed in his single Famous that the run-in had helped Swift’s career.

Taylor claimed she had never given West’s lyrics her blessing before the song was released, but then the rapper’s wife Kim Kardashian got involved, posting a Snapchat which appeared to show Taylor doing just that.

At the 2016 Grammys, Swift responded: “I want to say to all the young women out there – there are going to be people along the way who are going to try to undercut your success or take credit for your accomplishments or your fame.”

But, she advised her fans: “Just focus on the work and you don’t let those people sidetrack you.”

Taylor also made some digs at Kanye in her single Look What You Made Me Do. “I don’t like your tilted stage, the role you made me play,” she sang.

After leaving One Direction in 2015, Zayn Malik began working on some new material with Naughty Boy – the producer famous for his work with Emeli Sande and Sam Smith.

But it’s fair to say that he and Zayn didn’t quite hit it off in the same way.

Mr Boy later told The Guardian the 22-year old was “throwing his toys out of the pram” and said they had fallen out over “external influences”.

The number of artists which Azealia Banks (above left) has fallen out with is so huge that it could probably make a listicle in its own right.

But somebody who experienced a particularly high level of vitriol from her was Fancy singer Iggy Azalea.

For two artists who became popular around the same time and were only a couple of letters off sharing a name, perhaps comparisons and rivalries were inevitable.

It all kicked off when XXL magazine put Iggy on the cover of their annual freshman issue, which looks at the hottest newcomers in music every year.

Banks was not a massive fan of this editorial decision.

She said the magazine was “wrong” to include Iggy and went on to accuse her nemesis of appropriating black culture.

Iggy Azalea responded by saying: “You can’t block my blessings, today I’m celebrating, get on with it or kick rocks.”

The battle rumbled on for years, with Iggy claiming in 2014 that her huge chart success was the only reason Banks was still getting any publicity.

There was no shortage of rap feuds in the early 2000s. Nas and Jay Z. DMX and Ja Rule. 50 Cent and All Other Rappers.

But one of the most high-profile involved the biggest name in music at the time and the slightly less famous Benzino – a rapper and co-owner of hip-hop magazine The Source.

Benzino put out a track dissing Eminem called Pull Your Skirt Up, which described Eminem as a “2003 Vanilla Ice” and compared him to a woman.

Eminem retaliated with his own diss track, Nail in the Coffin, in which he said: “Nobody wants to hear their grandfather rap.”

If a new female rapper arrives on the music scene and Lil’ Kim (above left) doesn’t start a fight with her – did she ever even exist?

Kim has history with Eve, Foxy Brown, Remy Ma and many more… but those were small fry compared to when Nicki Minaj appeared in the late noughties.

Nicki’s debut album Pink Friday was a massive success when it was released in 2010, but Lil’ Kim opted not to send flowers.

In a diss track she put out online called Black Friday, Kim described Nicki as a “Lil’ Kim wannabe” who was “trying to clone my style”.

Minaj, naturally, responded with a diss track of her own, called Stupid Hoe. Which drew attention to the fact that her records were “shipping platinum” while Kim remained “busted” and “crusty”.

Things have now, of course, come full circle, with Nicki Minaj now the one feeling threatened by a newcomer and entering a public battle with the aforementioned Cardi B.

Probably best to finish on one that has a happy ending.

RiRi and CiCi, as they should never have been nicknamed, both launched their careers in 2005 – with Ciara topping the charts with Goodies and Rihanna hitting number two with Pon De Replay.

They were the young bright hopes of R&B and even went on tour together. But a few years later things turned sour.

“I ran into her recently at a party and she wasn’t the nicest,” explained Ciara in 2011. “It wasn’t the most pleasant run-in.”

There then followed the most glorious of Twitter exchanges.

Ciara: “Trust me Rihanna you don’t want to see me on or off the stage.”

Rihanna: “You gangsta huh?… Good luck with booking that stage you speak of.”

Ouch. But it didn’t take long for Rihanna to backtrack, writing: “Ciara baby, I love you girl! You hurt my feelings real bad on TV, that’s why I retaliated this way. So sorry!”

Ciara graciously responded: ‘Rhi, u know its always been love since day one! You threw me off in that party! Apology accepted. Let’s chat in person.”

Now isn’t that lovely. Let’s all be friends.

The Jewish Chronicle and Jewish News to go into liquidation